Kachinas goalies, goalie parents and coaches,
This is the goalie director Hiroki Wakabayashi.

It’s (NOT) all mental

People would casually say “Goaltending is 90% mental” but how true it is?
Anyone actually researched and studied the percentages of the mental aspects of the goaltending to prove the point? I’ve never seen such things yet.

Reality is, mental doesn’t have much to do with the outcome of the game performance at youth level because the level of the skill mastery is still quite low. You get scored on through your 5-hole twice in a game simply because of the lack of your fundamental skills, not much else.

Also, young goalies are allowed to have mental breakdowns during games because no one is supposed to be mentally rock solid at ten years old or so as we all weren’t.

Yes, mental does matter as you get older and play in highly competitive level because the average of the skill mastery is getting much higher among the elite athletes. Until then, you don’t really have to worry about mental. You should focus mainly on skill development and don’t need to go to zen training to stop the puck.

However, I believe it’s beneficial for all of us to know how the mental status affect the performance and productivity.

This is the famous “Inverted U Theory” or “Stress Performance Curve” to explain how the level of the stress (pressure) affect the performance. 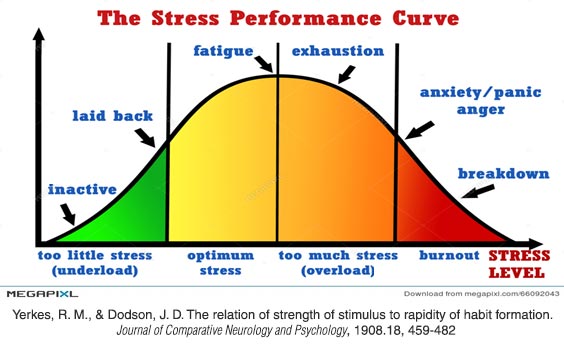 This graph is basically saying:

1. You can’t perform well when you are too relaxed or bored. (Left side of the peak)

This could happen in low shots against games, morning games, when the back up goalie unexpectedly stepped in for the pulled/injured starting goalie, etc.
Your mind is simply “not ready” and you could give up easy goalies because of it.

2. You also can’t perform well when you are tired, too intense or nervous. (Right side of the peak)

This could happen in high shots against games, second game of the day, when frustrated with bad calls, etc. Your mind is bothered by the physical fatigue and/or too much stress and you often lose the control of your body.

3. You can perform your best when you control your mind somewhere in the middle of Relaxed and Intense.

This is the ideal mental status to perform your best and the peak of the curve is called “zone” or “flow”.
You are so focused but relaxed and your movement is fluid without thinking or trying.

Personality and the Mental Performance

Some goalies have laid back personality and tend to look a bit lazy during practices but they can play much better in games (yes, it’s called “gamer”) because the game give them natural intensity and they can play close to the peak of the curve.

However, they tend to give up easy goals on low shots against games etc. because they are slow to focus on the game.

Some goalies are very serious or nervous in nature, work the hardest in practices, warm up and prepare so well before the game but they get too worried/nervous when the game start and get choked to ruin their performance. This happens when the pressure and excitement pushes their minds pass the peak of the curve.

Well, it’s no brainer that you can be confident and keep your mind closer to the peak of the curve if you’ve developed superior skills.

On contrary, you won’t be able to have confidence then get nervous (on the right side of the peak) if you know or sense your skills are not good or not consistent enough.

Which means, “He/she has all the skills but somehow loses the confidence in games” is too often said but it’s likely to be other way around unless you’re dealing with very high-end athletes.

In the next newsletter, I plan to introduce you few mental skills to control your mind staying closer to the peak but first, I recommend your goalies to reflect and analyze where their minds in the graph are during the game so they’ll understand which way they have to control their minds to.

Here’s a good document about the mental game you can take a look.

See you at the rink!