In 2018-19 NHL season, I, Hiroki Wakabayashitook the position of DYHA Jr. Sun Devils Goaltending Director. Goaltending Director in a youth club should mean something more than a traditional “goalie coach” or casually called “goalie guy” who is called in for the practices and given random ice time to work with goalies in the team/club.

As the Goaltending Director, I am in charge of creating and running the developing program for 21 goalies in 11 teams in the organization. In the very first meeting with our Hockey Program Director, we discussed about how to create and secure consistent, adequate ice time for goalies and structure efficient goaltending development program instead of goalie guy doing random or routine “warming up goalies” kind of drills in the first 5 minutes of the practice.

Therefore, we restructured our Monday Skills Sessions for 8U to 16U teams in order to give all the goalie to receive exclusive goalie instructions almost every week for 45 mins as below. 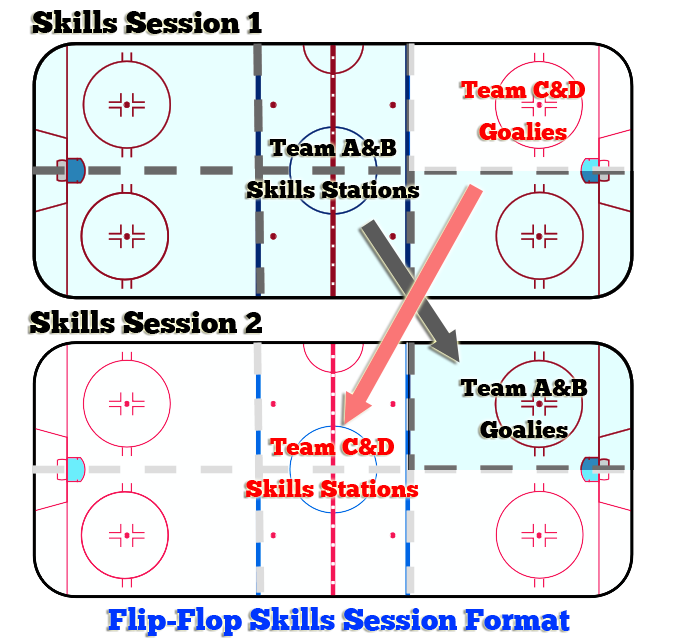 Every skills session has two teams on the ice for 45 mins and usually takes 2/3 to 5/6 ice sheet to run 3-5 skills station drills.

Skills Session 3 and 4 will run as same as above flip-flop format. This format allows a group of goalies (usually three to four goalies) to work with the goalie coach for full 45 mins and the skills coaches can use another group of goalies in stations as much as they want. Yes, goalies enjoy 90 mins of ice on Mondays.

Four shooters per goalie session are assigned by the Hockey Program Director communicating through the team managers. They are most likely coming from the same teams as the goalies, Team A&B shooters for Team A&B goalie session, etc. Only exception is 8U because they are too young to become shooters so one of the assistant coaches shoots for 8U goalies.

Combining Monday Skills Sessions and Weekly Practice Visits provide solid 60 mins of goalie specific instruction to each goalie almost every week for all the team except for 18U team. 18U team has no shared ice practice so the goalie coach just visits their practice weekly to work with the goalies.